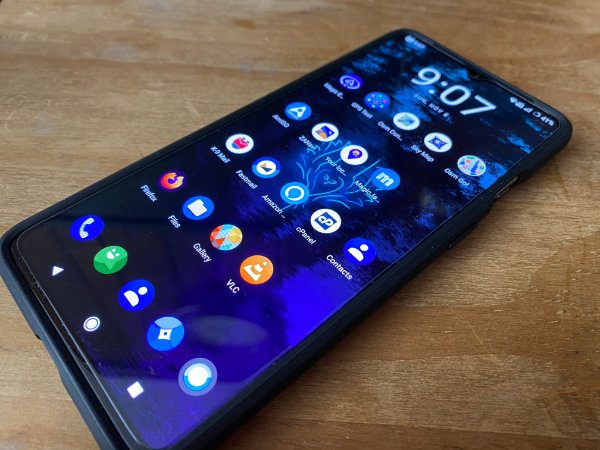 I recently wiped the factory OS off my OnePlus 7t smartphone and replaced it with AOSiP, an AOSP (Android Open-Source Project) fork. I used the installation guide found here. After a few weeks of tinkering with it in my spare time, I’m very happy with the results.

I’d actually been thinking about wiping the factory ROM from my OnePlus 7t for several months. It wasn’t that OnePlus’s OxygenOS flavor of Android was horrible. Quite the contrary, in fact. Other than for Zen Mode, which I hated, I think OxygenOS is one of the less-annoying OEM Android implementations.

The problem was Google. I was once a big fan, but in recent years (basically since they went public), the breadth, depth, and scope of their data-mining has just gotten to be too much for me. When my phone asked me to write a review of a Thruway rest area where I stopped to pee, that was the last straw. Is nothing sacred? I started selectively crippling as much of Google’s snoopware as possible.

I didn’t wipe the ROM just yet, however, because some of the banking and financial apps I needed simply wouldn’t run on custom ROM’s nor on phones with unlocked bootloaders. Besides, aside from Google’s spyware, I actually like Android. So I plodded along for several months using a stock Android in which I’d disabled as much of Google’s data-mining functionality as I could without rooting the phone.

And Then Came the Move

After a recent move, I found that neither Verizon nor AT&T prepaid had reliable signal at my new location. They both worked outside the house, but not inside the house. WiFi calling on T-Mobile was supposed to work with the 7t, but I couldn’t make it happen using the stock ROM.

The reason the reception inside my house is so bad is that there’s a mountain behind the house whose signal shadow ends at the front porch. So I can get great signal outside in front of the house, but practically none inside. That meant I needed to use WiFi calling, which the OnePlus 7t supports, but which neither Verizon nor AT&T support on that particular phone (and which I couldn’t get to work with T-Mobile). Long story short, I had to buy a new phone.

An hour or so on the Interwebs revealed that there were very few high-end, unlocked phones that supported WiFi calling on both AT&T and Verizon. The field consisted of the Google Pixel, a few high-end Samsung Android phones, and any recent iPhone.

In The End, It All Came Down to Privacy

In a nutshell, my choices boiled down to buying another Android that I’d have to cripple to keep Google out of my business, or buying an iPhone from a company whose fanaticism for privacy is legendary.

Being a hacker at heart, I’d always preferred the Android OS over the tightly locked-down iOS. As much as I detest Google’s datamining-based business model, I won’t deny that Android is a fantastic smartphone operating system.

But I also have always had great respect for Apple’s fanaticism about privacy, which stands in stark contrast to Google’s business model. And even though the hacker in me finds the lack of customization in iOS rather… well, boring, for lack of a better word, I won’t deny that it’s a solid, stable, secure, capable, and above all, private platform.

In the end, my craving for privacy won out. I got back on the Interwebs and ordered an iPhone. I had to buy a new phone anyway to make the WiFi calling work; so while I was at it, I struck a blow against the ponderous breadth and depth of Google’s Orwellian data-mining and chose privacy.

But What About my OnePlus 7t?

Rather than retire my beloved and capable OnePlus 7t with its superb hardware, I decided to liberate it from Google’s spyware, load open-source AOSiP on it, and customize it into an in-car computer with navigation, communication, and telephony capabilities. You can read about the procedure that I followed here.

Before I go on, I should mention that replacing the ROM on any phone is risky. It’s not an inherently difficult process — if you have a computer and a USB cable and know how to read, you should be able to do it — but it’s an unforgiving process. At some stages, even the slightest mistake can “brick” your phone, meaning that it will not boot (and may never boot again, depending on how badly you bricked it). So if you’re pondering doing this yourself, read up on it first and make sure you follow the instructions to the letter.

As an unexpected surprise, T-Mobile WiFi calling works using AOSiP on the OnePlus7t. I couldn’t get it to work with the stock ROM. So I’ve subscribed to an inexpensive T-Mobile prepaid plan to provide the data feed for the navigation apps, for email, and for calendar synchronization. (WiFi Calling on the OnePlus 7t still doesn’t work with AT&T or Verizon, however, even with AOSiP.)

Because I chose the ROM without GAPPS (a community replacement for the staggering amount of spyware that Google includes with stock Android), I was limited to apps that don’t require Google Play Services or a Google account. That meant searching for the APK files and either manually installing them or using F-Droid or APKPure. So far, I have the following apps installed and working:

In fact, the OnePlus 7t running AOSiP can do almost anything I need a phone to do. Specifically:

And much more — all without Google poking their nose into my business.

In summary, my plan for the 7t was basically to use it as a glorified GPS unit. But running AOSiP, it’s a full-functioned phone that does much more than I had planned for it — and does it very well and very privately. If VZW and ATT supported WiFi calling on it and if it ran my financial apps, it would be the only phone I’d need.