A few days ago, I woke up with some back and hip pain. It wasn’t bad enough to call the doctor about, but it was bad enough to be annoying. It felt like mild sciatica. I decided to rub some arthritis cream into it and give it a few days, and if it didn’t get better, I’d call the doctor. In a few hours, however, the pain was gone.

Until the next morning, anyway. I woke up with the identical pain. And the morning after that, and again the following morning. Each day, I woke up with pain, but it went away a few hours later.

At some point it dawned on me that either my mattress or my back was getting old; and new backs not being easily attainable at any of my usual shopping sources, I decided to buy a new mattress.

For context, my existing mattress is of unknown age and was made by a company I never heard of. I bought it used at a barn sale about seven years ago. I paid $50.00 for the mattress, box spring, bed frame, and headboard. I paid cash and hauled it home on top of my car, tied down with old rotten ropes like any good redneck would do. (Perhaps unlike a good redneck, I sprayed it down for vermin and steam-cleaned it when I got home; but hey, no one is perfect.)

Nonetheless, as good a deal as it had been, it was clear to me that the old mattress had lost its magic; so with tears in my eyes, I took the safety wire off my wallet and decided to buy a new mattress.

Now mind you, mattresses aren’t the kinds of things that can be bought sight-unseen. Well, I guess they can be, if you want to get technical about it; but I’d rather try it out first. So I took a trip to Sam’s Club and tried out some mattresses. My plan had been to do my testing while wearing pajamas for the maximum accuracy of the results; but the store manager looked at me funny when I started undressing, so I nixed that idea.

After spending roughly the equivalent of a night’s sleep trying out every mattress in the store, I decided that my favorite ones were the “hybrid mattresses” that had a layer of memory foam over coil springs. They had just the right combination of springiness and conformity. The ones that were all memory foam weren’t springy enough, and the ones without the memory foam were too springy and not conforming enough. The foam over the coils was the ticket.

That created a dilemma because my old mattress had coil springs. In fact, I think it was those coil springs poking in my back that were the cause of my back pain. Being your basic tightwad, I decided that it was silly to spend hundreds of dollars on a new hybrid mattress with foam over coils when I could just by a memory foam mattress topper for my old coil spring mattress and have basically the same thing.

And friends, that’s exactly what I did.

Now these here mattress toppers are funny things. They come rolled up and compressed in a box. That makes them convenient to carry home without a trailer, but it also means that you have to unroll them and let them sort of breathe for a while before they resemble something that might fit on a mattress. 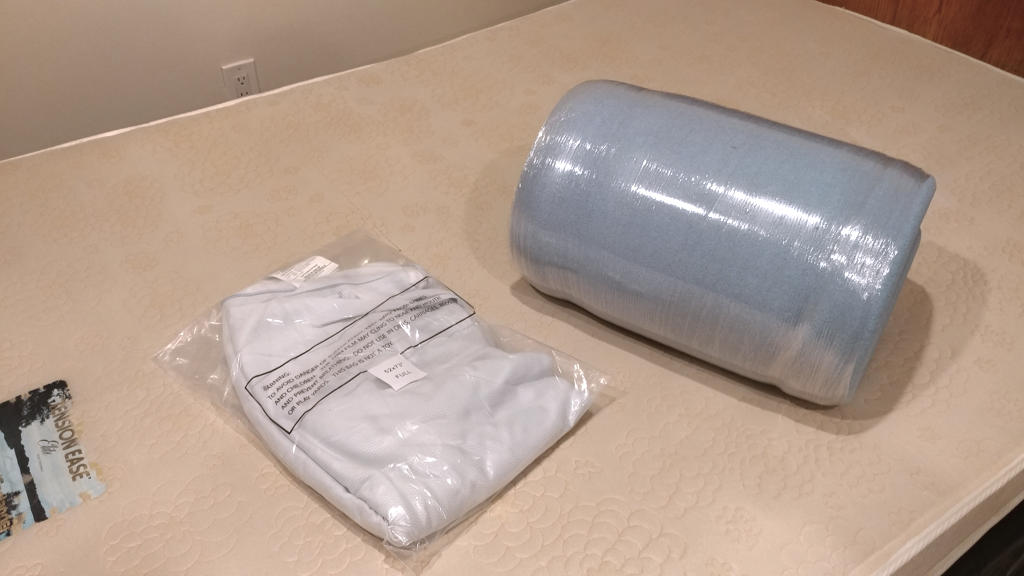 Mine also came with a mattress cover that holds the topper down and covers both the topper and the mattress. But first, the topper had to be unrolled. That turned out to be an easy, but slow process. You have to kind of let it rest at certain points or else it feels like it’s about to break. 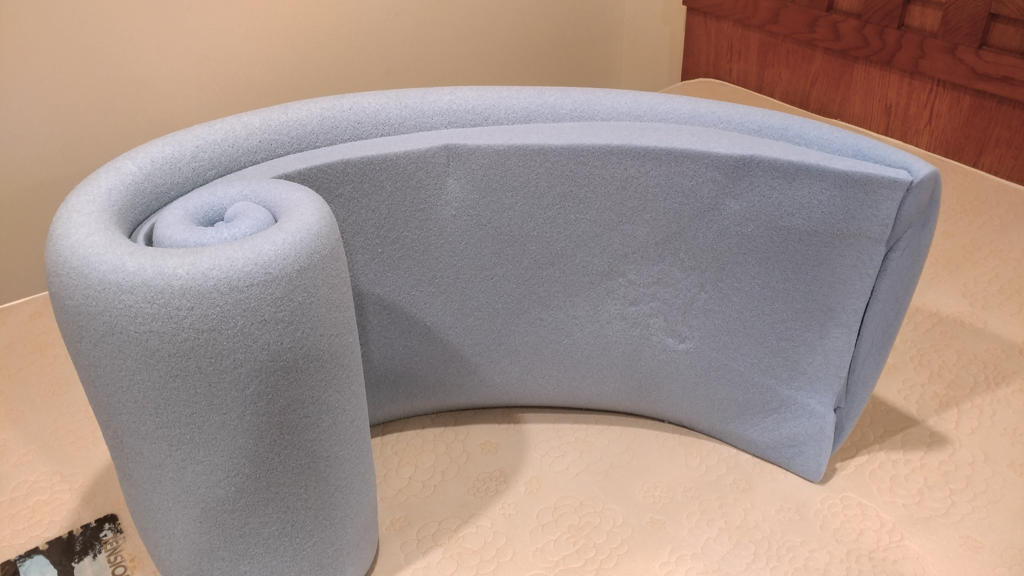 During this process, the topper resembles a giant cinnamon roll. It doesn’t taste anything like one, though. Not that I would know, mind you. I’m just saying.

Once you manage to unroll the topper, you then have to unfold it.

Next, you have to let it sit for a while while it comes to life. An hour or so should do it. 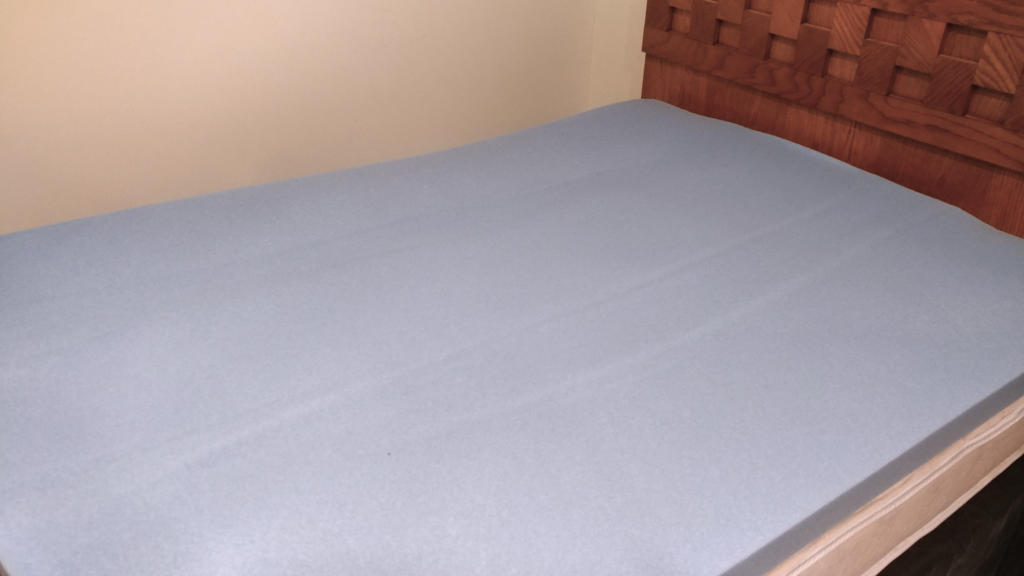 Mine expanded in all three dimensions. At first I thought it would be too small for the mattress, but an hour or so later, it had magically expanded in all directions, and the creases from where it had been folded disappeared.

The final step was installing the mattress cover, which is exactly like installed a fitted sheet, which means that you have to try to install it first in the wrong direction because it’s not easy to tell the length from the width when it’s folded. So invariably, you have to try putting it on in the wrong direction first. It’s a rule, kind of like a butter-side-down thing.

Once installed in the right direction, it actually looks pretty good. 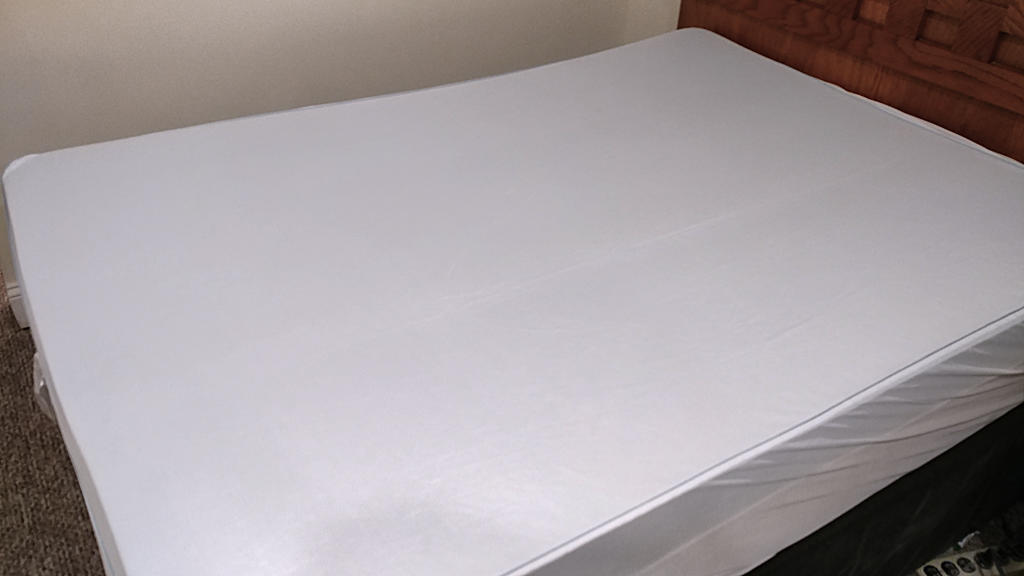 As for how it feels, I have to say, it feels pretty darn good. When I lay down on it the first time, it felt like all the joints in my back (including some I didn’t know I had) were popping themselves back into place like there was a miniature chiropractor in there poking and prodding at subluxations I hadn’t even known I had. It made me want to go back to bed right then and there.

But alas, my one set of winter sheets were in the washer soaking in OxiClean, so I’ll have to wait until they’re washed and dried to take a proper test nap.

OxiClean, by the way, is another amazing thing. I give it as a gift to young people going to college or setting up their first homes or apartments. It gets head smell out of pillowcases, fart smell out of pants, armpit smell out of sweatsuits… You name it, OxiClean cleans and deodorizes it. That Billy Mays certainly knew what he was talking about, that’s for sure.

I’ll have to do a post on OxiClean some day.