A few friends of mine who read my post about hooking up a portable generator to power my house have raised a few good points about information that I omitted or could have described more fully, so I decided to add answers to those questions as a separate post. 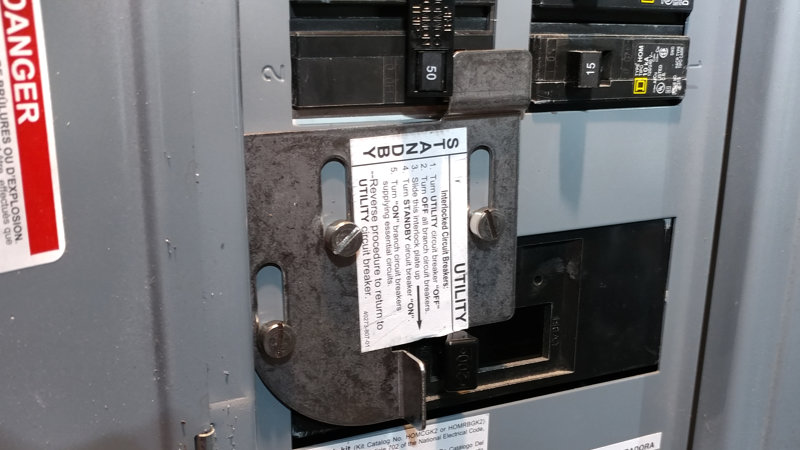 The question that came up most often was why I chose to use a panel interlock rather than a generator transfer switch to isolate the standby generator from the power grid. You have to use one or the other to avoid your generator energizing the grid and possibly electrocuting a lineman.

The first thing I should mention is that although they meet NEC requirements, not all local jurisdictions allow panel interlocks. Some localities require that you use a transfer switch. If that’s the case in your jurisdiction, then the decision has been made for you.

In my jurisdiction, however, panel interlocks are acceptable as long as they’re UL-listed. Some local codes also require that they be manufactured by the same company that made the panel. I chose to use an interlock that was both UL-listed and made by my panel’s manufacturer. Inspectors have been known to make up rules on-the-spot, so I figured I might as well head off that possibility right from the start.

The main reasons I chose the panel interlock were simplicity and cost. Using a generator transfer switch would have cost between $400.00 and $800.00 more by the time all was said and done. It also would have taken between five and eight hours longer to install. When installing a transfer switch, you have to wire each standby breaker in the transfer switch to the corresponding circuits in the panel, which takes much longer than simply wiring the one standby generator breaker and installing the interlock itself.

The other reason I chose the panel interlock is because it allows me to use the main panel to decide which circuits get current while being powered by the generator, rather than being limited by the number of breakers in the transfer switch. Most 50-amp transfer switches are limited to ten circuits. I wanted to be able to choose to power any of the circuits in my house up to the generator’s rated output (though obviously not at the same time).

By using the interlock switch, I could, for example, choose to power my electric clothes dryer if I absolutely needed to dry laundry for some reason. All I’d have to do would be shut off some of the other high-draw circuit breakers that might automatically kick in while drying the clothes (freezers, well pump, and so forth), and simply not use other high-draw items like the electric range, dishwasher, and air-conditioner while the clothes were drying. Or I could shut those breakers off, too, if I wanted to be certain that neither I nor anyone else absentmindedly turned them on while the clothes were drying.

Finally, the generator itself is breaker-protected (in addition to the new backfeed breaker I installed in the panel) and all the wiring exceeds the breaker capacities. So even if I did inadvertently overload the generator, the worst thing that would happen is that I’d pop a breaker. That would be a bother, but not a tragedy.

Another question I had to answer was:

Can Any Circuit Breaker Be Used as a Generator Backfeed Breaker?

That answer turned out to be no. Most circuit breakers don’t care in which “direction” the current flows, but some do. Grossly oversimplified, If the breaker terminals are labeled with markings such as “LINE” and “LOAD,” then it matters in which “direction” the current flows through the breaker. If not, then it probably doesn’t. 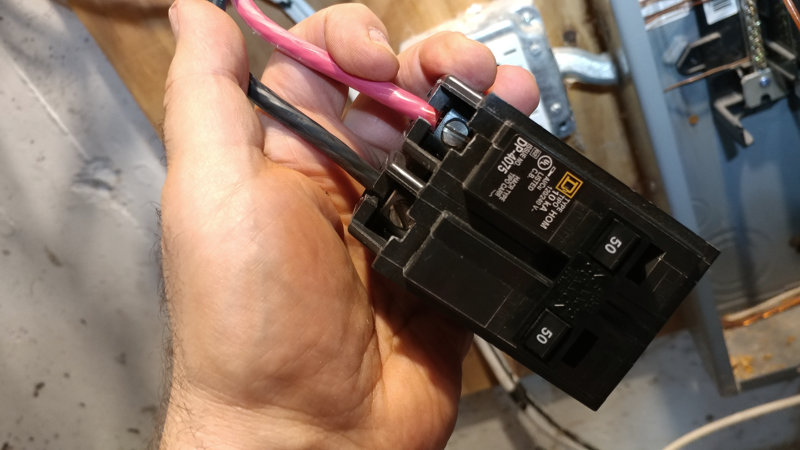 My breakers don’t have those markings, so I contacted the manufacturer and asked them if the circuit breaker I was considering could be used as a backfeed breaker. They said it could.

The other thing I had to do was choose the breaker appropriate for the circuit in terms of voltage and amperage. I’m using the 240V, 50-amp output on my generator, I wired my circuits to 50-amp standards, and my house has a Square D distribution panel and uses HOM breakers; so I needed a Square D 240V, 50-amp, 2-pole HOM breaker, in addition to the interlock kit.

If you have any doubts whatsoever about what you need, please consult a qualified electrician. This post is an explanation of what I did, not a tutorial about what you should do.

The next factor I had to work out was:

How to Determine What Wire to Use for a Backup Generator

In a nutshell, my choice of wire was determined by the National Electrical Code.

To determine the wire gauge requirements, I had to know the ampacity (maximum current in amps) of the circuit, which was 50 amps in my case; the type of conductor (I used copper); and the type of wire and insulation (I used NM or “Romex” from the panel to the junction box, and THWN-2 from the junction box to the inlet box). The runs were very short, so the length was negligible in my particular case. 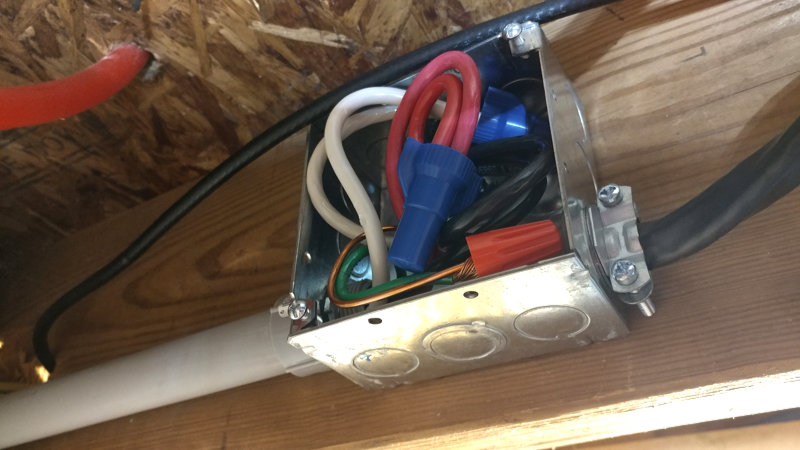 I also knew that the portion of the wire that would run through the exterior conduit would have to be either UF or THWN-2 to meet the requirement that outdoor wire, even when in conduit, be rated for wet areas. THWN-2 is much easier to work with than UF and could be fed through a smaller conduit, so that’s what I chose for the outdoor run. Had I been burying the wire, I would have used UF (underground feeder) cable. 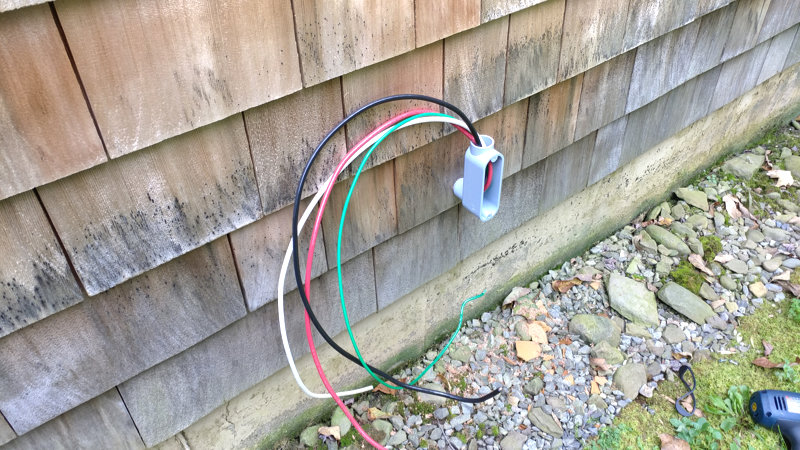 When all of those factors were considered, it turned out I needed AWG 6 wire for both the NM cable and the THWN-2 to meet the codes and to satisfy my personal safety margin requirements.

I also could have run the THWN-2 directly to the panel in conduit, but that would have been extra work for no benefit. Besides, I already had some 6-gauge NM cable in the basement.

How Did I Choose a Backup Generator?

I wanted a portable generator so I could use it for additional purposes other than powering the house during a power failure; but I wanted it to be powerful enough to meet all of the essential electrical needs of my home and have enough extra power to use at my discretion for things like making coffee, watching television, and so forth during outages. By adding up the power requirements of the essential and optional devices, I decided that I needed a generator with roughly 9,000 to 10,000 watts running capacity and about 12,000 watts starting capacity.

After months of research, I decided that the A-iPower SUA12000E Portable Generator had the best combination of cost, reputation, and positive reviews of all generators I researched in that power range. I also noticed that the manufacturer was active on the various review and question-and-answer boards I consulted. That’s always a nice thing because it suggests good product stewardship.

Why Did I Choose a Gasoline-Powered Generator?

I chose gasoline over propane mainly because I have to keep gasoline around anyway for other power equipment that uses it like my snowblower and lawnmower, so storing a bit more is no big deal.

The other factor influencing my decision was that most outages here don’t last more than a few hours, and the A-iPower SUA12000E can run about nine hours on a tank of gas; so I decided that the added work of piping a generator into the propane system wasn’t worth bothering with. If we frequently had longer outages, I would have considered a propane-powered generator.

There is an aftermarket natural gas / propane conversion kit available for the SUA12000E, but I haven’t installed it. Maybe I will when the warranty expires.

How Has the A-iPower SUA12000E Generator Worked Out as a Backup Generator?

As of this writing, I haven’t experienced any outages since installing the generator. But I’ve done several load tests, and it’s worked fine every time. So far, I’m happy with my choice. The first actual outage will be the real test.