I’ve had this Acer Aspire notebook for years. A client hated it and gave it to me years ago, and I’ve used it for all sorts of duties including, for a time, a Linux video server. I recently brought it out of mothballs again, installed Android on it, and am using it as an alarm clock with news, weather, and emergency alerts. 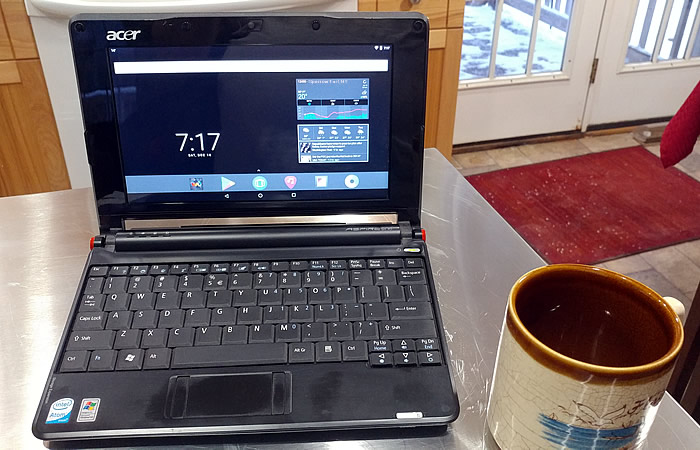 Acer Aspire ONE ZG5 with Android installed and re-purposed as an alarm clock with alerts.

Installing the Android operating system on the Acer Aspire ONE ZG5 was easy. I just downloaded the 32-bit (i86) version of Android for PC from here, made the ISO into a bootable flash drive using Rufus, and booted into it. About 10 minutes later, the notebook was running Android Nougat. I chose the 32-bit version because this old notebook has a 32-bit processor.

This was an easy project and took about an hour from the time I decided to do it, including finding the download and burning it to a USB stick. I downloaded and installed android-x86-7.1-rc2.iso, so I can’t vouch for any other Android version. Also, this machine has 1GB of RAM. I think some of them came with 512MB. I can’t say how well Android will run on the ZG5 with less than 1GB RAM.

The text-based installation should be familiar to anyone who’s ever installed Linux in text mode. These are the specific steps that I used. Once I obtained the download and made the bootable USB stick using Rufus, I booted the machine into the USB stick by pressing F12 during boot to select the USB drive. I then answered the Android installation prompts as follows:

Then I waited about 10 minutes, and when asked if I wanted to reboot, I answered Yes. I removed the USB stick from the drive before the notebook restarted, and voila, I had a functional Android notebook.

The reason I chose Android was because it’s small, lean, and has a ready supply of apps. I wanted to use this machine as an alarm clock with weather, news, and emergency alerts, all of which are available from the Google Play Store. My personal favorite for weather is the Weather Underground app. The Google News and Weather app is also pretty good. There bazillions of others that you can choose from to provide updates regarding whatever you’re interested in.

The only hitch I encountered was an expected one: The notebook’s battery was dead as a coffin nail. But that problem was easily solved: I just ordered a new 9-cell battery for the Acer Aspire ONE ZG5 from Amazon. It’s bigger than the stock battery and causes the notebook to slant forward slightly, which I think is actually an improvement. But more importantly, it will power the notebook for at least six hours — that’s as long as I tested it for — so it will still wake me up if the power goes out.

All in all, I think this was a worthwhile project, especially considering I already had the notebook. For the price of the battery, I got an advanced alarm clock that shows me at a glance the most important I need to know about what’s going on when I wake up. It’s also portable enough that I can take it with me if I travel; and if I wanted to, I could also do things like check my email or sync my calendar and contacts. I’d say it was a pretty productive hour.