As my followers (both of them) know, I recently tried out #DirecTV Now, a streaming version of the company’s satellite programming service. I tried it for about three days before getting fed up with the service. It has more bugs than a cheap deli in Brooklyn. You can read more of my review here.

The really sad thing about the whole DirecTV Now debacle is that despite the fact that this service is so unstable and unreliable that it barely qualifies as an Alpha release, DirecTV is stubbornly refusing to issue refunds to customers like me who foolishly skipped the free trial and paid for the first month’s service in advance in order to get the streaming device (which I returned unopened, by the way).

DirecTV denied my refund request, as well. Fortunately, I’d paid for the first month using my #USAA Visa; so when DirecTV refused me a refund, I simply filed a dispute with USAA Savings Bank, who is the card issuer.

And then today I got this lovely letter in the mail: 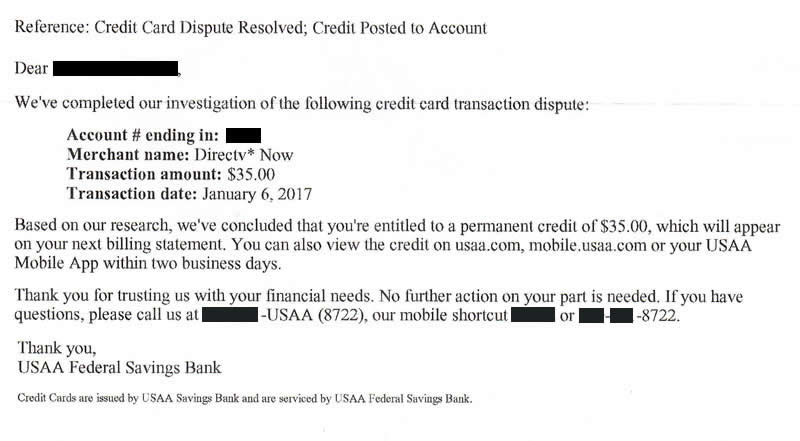 DirecTV is actually lucky. My next move was going to be a complaint to the FCC. To my knowledge, the FCC has ruled in the consumers’ favor in every single complaint about this debacle that’s been filed.

This whole mess was a major screw-up on DirecTV’s part, and I don’t mean only the technical problems. By putting out a service so unspeakably bad and refusing to make early adopters whole with refunds or credits, they have practically guaranteed that those early adopters will never come back, even if and when the company works out the glitches.

A smarter move would have been to offer free months of service to every customer who complained in order to compensate them for the unusable first month. That would have been a win:win solution: The consumers would have gotten get compensation, and the company would have kept at least some, and maybe even most, of the early adopters.

Consumers who rejected that offer should have been given refunds. This service is so bad that it’s downright unusable. There is such a thing as fitness for purpose, and DirecTV Now is about as unfit for its purpose as it gets. I mean, seriously, the company should be embarrassed. By stubbornly refusing to make customers whole, they’re destroying what little credibility and good will the company has left (as well as tarnishing the image of their parent company, AT&T).

But hey, it’s not my problem anymore. I got my refund, albeit not willingly on DirecTV’s part.So I’m good.

If you’re in the same situation as I was, all I can recommend is that you request a refund from their chat operator, and if it is denied, have a copy of the chat transcript send to you. Then file a dispute with your card issuer, carefully documenting the details of when you signed up and how the service has been [not] working, and attaching a copy of the chat transcript. It worked for me. YMMV.