As with every generation, mine has made mistakes. We’re passing on problems to the next generation that we might not be if we’d had better foresight. Some of these problems were ones that we caused, while others we merely failed to solve.

Personally, I think my generation has failed most miserably in terms of economic issues. Today’s young people face a far more difficult path to the American Dream than did mine; and for that, I am sorry. It used to be simply assumed that the next generation would have it better than we did. That assumption has proven to be wrong. I really wouldn’t want to be entering the job market these days. I really don’t know how young people are going to make ends meet.

I also understand the younger generation’s anger about inheriting a planet whose fundamental survival as a place fit for human life is far from certain. Global climate change has the potential for cataclysmic damage to the earth’s ability to sustain us as a specie. How could they not be angry about inheriting a problem of that magnitude?

What I don’t understand is why today’s young people blame my generation for global climate change and the rest of the environmental challenges that they are inheriting. I say that because for all our faults and failures, one thing my generation did accomplish was to start cleaning up the place that we inherited. 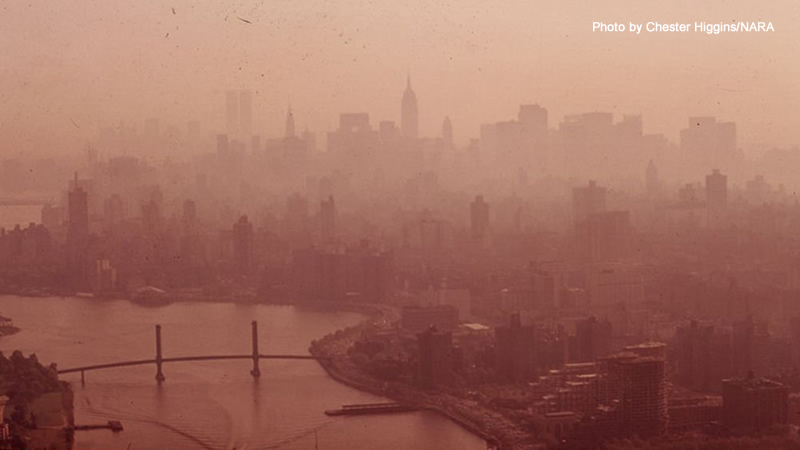 That picture is of the New York City I remember as an adolescent. I grew up in Brooklyn, and there were days when we couldn’t see Manhattan from our side of the East River. Hell, there were times we couldn’t see the ships tied up at the docks two blocks away. A walk across the Brooklyn Bridge should have been a surreal experience because we were literally walking through smog. But it wasn’t. We were used to it. It was just the way things were; so whatever surrealism it might have had bowed to the reality of its monotony.

I remember being speechless the first time I looked up at the nighttime sky when my family was staying at a bungalow in Sullivan County, about a hundred miles north of the city. There were so many stars! In Brooklyn, we could only see a very few of the very brightest starts, and that was on what would be a “clear” night by New York City standards back in those days. On bad days, on the other hand, you could barely see the moon, much less the stars.

Back then, landlords had to hire crews to clean their buildings every few years. They’d erect scaffolding and wash and steam-clean the soot off the front of the buildings. The difference it made was amazing. We never realized how dirty the buildings were until they were cleaned. They practically glistened compared to the adjacent ones, which would often cause the landlords of those buildings to hire cleaning crews, as well, just not to be thought of as slumlords. Being a slumlord was one thing. Being thought of as a slumlord was another.

It wasn’t until decades later that I realized that the soot was part of what made “bad” neighborhoods feel “bad.” The buildings were so evenly covered with soot that you couldn’t really see them. They all kind of blended into one because of the layers of soot that covered them. The slumlords who owned the buildings in the “bad” neighborhoods weren’t going to shell out money for people to come steam-clean them; so over time, the buildings lost their distinctiveness and fused into block-long walls of soot punctuated by doors, windows, and fire escapes.

That was the world the boomers inherited: a world full of smog and covered in soot. And we were the ones who started cleaning it up, mainly through political pressure that forced the adoption of laws like the Clean Air Act and its progeny.

Back then, most climate scientists believed that we were heading for another ice age. They were wrong, of course. Natural history evidence discovered since then suggests that we actually are just leaving one and that the earth is entering a warming cycle. The evidence also suggests that human emissions are accelerating that cycle, and I have no doubt that that’s true, too; and I do understand why today’s young people feel an intense anger about that.

I just don’t understand why they blame my generation for it. We inherited much worse worse situation than they are inheriting now, and we started the work of cleaning it up. We haven’t finished the job, but we managed to make some phenomenal improvements. If we hadn’t, I don’t even want to think about the shape the earth would be in now.