My post yesterday about the reasons I believe brick-and-mortar retail chains are dying got rave reviews from my readers and fans. Both of them. So I thought I’d follow it up with a post about a retail chain that’s an exception to the rule. It’s not only surviving, but thriving. They’ve opened three new stores in New York State just since I’ve been up here in Sparrow Fart. The nearest one is a mere two and a half hours away from me — not very far at all by Sparrow Fart standards.

And yes, I have made that trip from time to time. It was worth it. This store really is that good.

The name of this unusual chain that’s managing to buck the trend and grow while the rest of brick-and-mortar retail seems to be at death’s door is Micro Center. 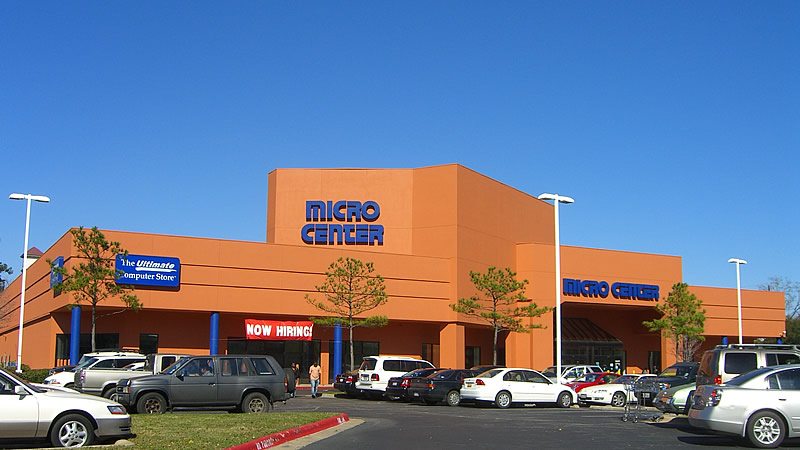 Let me tell you a little story. When I still lived in The City and I had my consulting business, I frequently needed all manner of oddball computer parts on short notice. Usually we needed parts to upgrade existing computers to run newer programs. A typical desktop computer back then in olden times would set you back several thousand dollars, so people didn’t just toss them in the garbage and buy new ones like they do today.

There was a CompUSA store about a mile from me in Queens. But when I needed a part to upgrade a client’s machine (or just about anything computer-related, for that matter), I would make the roughly 40-mile trip to Micro Center in Westbury instead. The reasons were simple.

The first reason was that Micro Center had everything — and I do mean everything — that was even remotely related to computers. It didn’t matter whether I needed a state-of-the-art blade server, the latest and greatest Intel processor, a header cable, or an ISA sound card for an ancient Win95 machine whose owner wouldn’t give it up. If it had anything to do with computers, Micro Center would have it — usually in at least half a dozen different models.

Micro Center also had dozens of new computers in stock, including PCs, Macs, and servers, as well as handheld devices of all sorts. If, on the other hand, you wanted to build your own computer, they had every conceivable part you could need to build a computer that could power a mission to Mars.

In short, Micro Center had everything a geek could ask for — and then some.

The second reason I loved Micro Center was that the dumbest salesperson there was still smarter than I was. In fact, I think I learned more about computers from salespeople at Micro Center than I learned from all the books I read, all the courses I took, and all the certification exams I prepped for. I’m telling you, those guys and gals were smart.

You have to understand, I was a professional with multiple I.T. certifications. But being a professional doesn’t mean that you know everything. A lot of times you have to lean on your suppliers for help solving some problem you haven’t come across before. Micro Center was (and still is) the kind of place where you could get that kind of help. You could bring in some failed computer part, lay in on the counter, and say, “I need one of these,” and they would know exactly where in the store to find one (or more) of those for you.

In short, Micro Center didn’t just have a lot of stuff. They also had smart people selling it.

CompUSA, on the other hand, was pretty much useless. They were more of a Walmart sort of operation. They mainly stocked stuff they figured would move quickly, like  consumer-grade desktops and stuff geared toward adolescent gamers. They had some computer parts in stock, but the selection was thin and consisted mostly of the latest and greatest (and most-expensive) offerings for gamers, like high-powered video cards and liquid processor coolers. It wasn’t the sort of place where a professional would be likely to find the parts he or she needed to fix an existing computer used in an office setting.

More importantly, however, the sales staff at CompUSA were, to put it kindly, less than brilliant. They weren’t utter morons, but they certainly weren’t the kind of people from whom an I.T. professional (or even an advanced user) could get good advice on advanced topics. Most of them were kids and young adults who knew which video cards worked best with which games, but not much more than that. It wasn’t a place a professional could go to find a real expert who would walk with them through a problem and find a solution. They just weren’t of that caliber.

Some years have passed since then, and that CompUSA store in Queens is closed now. In fact, they’re all closed now. The company shuttered them all in 2007. But there’s a brand-new Micro Center about a mile away from where CompUSA used to be, and it’s thriving. It’s one of three new stores they’ve opened in New York since I moved to Sparrow Fart (in addition to the one in Westbury that I used to frequent).

Micro Center is thriving in a sector that is dying because they embrace the three secrets to success in brick-and-mortar retail: extensive selection, sufficient inventory, and smart salespeople who are well-paid and properly-motivated. I hate to even call these things “secrets” because they seem like common-sense rules that retailers would universally embrace. But apparently that’s not the case. I really can’t think of any other retail store I’d make a two-and-a-half-hour drive to visit.

As for their pay, Micro Center’s salespeople work on salary plus commission. When they sell you something, they put a sticker on the box to identify themselves as the seller. When the items are scanned at check-out, the commissions are also tallied up. Items with no stickers are credited to the department and the commissions divvied up among the department’s employees. The system works well. I became friendly enough with some of their Westbury salespeople to learn that a good salesperson at Micro Center can make a very decent income.

There also is very little turnover. In fact, a lot of the income of Micro Center’s salespeople comes from what you might call “good-will residuals.” Happy customers tend to seek out the salesperson who helped them the last time they were there or who seemed to have special expertise in some area of technology. Consequently, good, knowledgeable salespeople get a lot of repeat business. When you work on commission, that’s a valuable thing. It’s the kind of thing that makes you want to do your very best for every customer you serve. Today they may only need a $20.00 stick of RAM. But tomorrow they may need a dozen workstations.

I wish there were more stores like Micro Center, and maybe there are. But I haven’t found any. Quite the contrary, the trend in brick-and-mortar retail seems to be moving in the opposite direction: Shitty stores are getting even shittier. The more desperate they get, the more they compound their problems by doing more of the very things that got them into trouble to begin with: slashing selection, cutting inventory, and replacing their most-experienced (and best-paid) salespeople with younger, cheaper new hires.

Micro Center is a happy exception to the rule, and their continuing success proves the wisdom of their approach. But the rest of brick-and-mortar retail is swirling closer and closer to the drain. Unless they get smart and change their ways, very soon they will be gone.