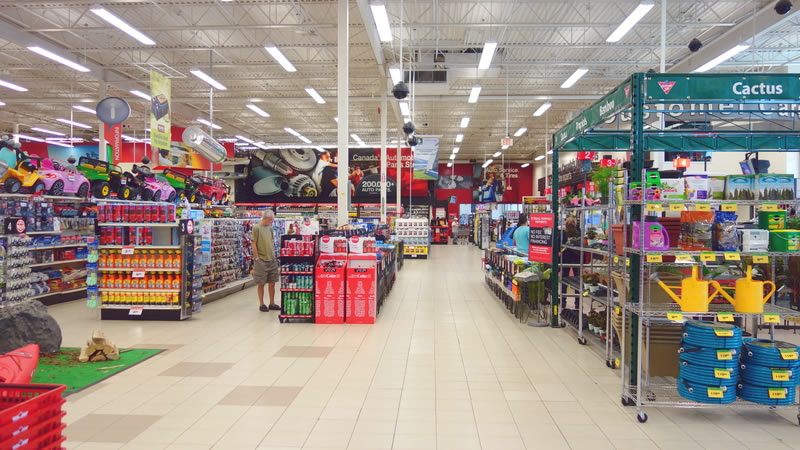 Retail as people my age used to know it is dying. Of that there can be no doubt. When you can walk into a large department store and there are more people working there than there are customers, it’s pretty clear that that’s an unsustainable business model.

Many theories have been proposed to explain why retail is dying. Obviously, the advent of online shopping is one of them. But what is it about online shopping that makes it so attractive? I mean, you don’t get to see and touch the products, you have to wait to receive them, and you have to pay for shipping — unless, of course, you’re smart and become an Amazon Prime member like I did. In fact, in the spirit of generosity, I’m going to give you a link to try an Amazon Prime 30-Day free trial

Still, one would think that most people would prefer just walking into a store and walking out with their purchased items rather than having to wait for them. Two-day shipping with Prime is great, but walking out of the store on the same day with your item in hand would be even better, wouldn’t it?

Well, yeah — except that that’s not what happens in the real world.

I made the mistake of going to Walmart today. I usually don’t go to Walmart because I’m always afraid of being run over by some fat-ass driving an electric cart. But I had to go to BJ’s to buy some food anyway, and the two stores are less than half a mile from each other. So I decided to stop at Walmart to buy three things that I figured they surely would have: salt substitute, a small battery backup for my parents’ computer, and a 3-foot USB extension cable.

For the battery backup, I wanted a small one, preferably a 350 VA. The reason is because my parents have a backup generator on the house, and it’s usually not more than five to seven seconds before it kicks in when there’s a power failure. They’re also retired and on fixed incomes, but stubbornly insist on reimbursing me for shit like this, so I wanted to save them some money by buying the smallest battery backup I could find. It only needs to power the computer for seven seconds — ten at the most — so a 350 VA would be more than enough.

I walked into WalMart fairly confident that I’d walk out with the items I was looking for. The thought that they wouldn’t have them hadn’t even occurred to me. I mean, they’re common items. It’s not like I was looking to buy a piston ring for a 1973 Camaro. I wanted salt substitute, a 3-foot USB extension cable, and a small battery backup. Surely they would have all of those items in stock, right?

Walmart had none of those things in stock.

Which brings me to the first reason why brick-and-mortar retail is dying: Retail stores like Walmart just don’t stock enough stuff in terms of either variety or sufficient quantity. Online retailers like Amazon do. When I got home, I punched all three of those items into Amazon, and BAM, there they were, in every possible variety one could ask for.

The main reason why brick-and-mortar stores don’t have enough inventory is that few of them have stockrooms anymore. There are two reasons for this. First of all, retailers want to maximize display space. Square footage is expensive, and they want to make sure that as many square feet as possible are devoted to selling stuff, not storing stuff. Secondly, low-paying retail companies used to have a lot of problems with employees stealing stuff from the stockrooms. It’s called “pilferage.” They solved their pilferage problems by eliminating the stockrooms. It’s harder to steal shit when you’re out in the open.

The problem with not having stock rooms is that it means that what’s on display is all the store has; and because display space is limited, they only stock the stuff that they think is going to turn over quickly. Furthermore, when something runs out, you can’t ask a store employee to run back into the stockroom to fetch some more. There is no stockroom. What you see is what you get. Or more to the point, what you don’t see is what you don’t get.

In the spice aisle at Walmart, there was a big, empty void on the bottom shelf where the salt substitute should have been. They do carry it. They just had none in stock today. They had at least a dozen varieties of actual salt in various sizes and packagings, but not a single shaker of salt substitute. Amazon, on the other hand, does have salt substitute in stock. In fact, they have scads of salt substitutes, all just a click away.

As for the battery backup, Walmart had one model in stock, but it was both much larger than my parents need and much more expensive than I want them to have to pay. Amazon, on the other hand, has more than five thousand battery backups to choose from, all a mere mouse click away.

As an aside, the computer itself is also coming from Amazon. My parents’ computer died this past week and they asked me to order a suitable replacement. Amazon had the best deal I could find — even better than the commercial suppliers I deal with. I should have just ordered the battery backup from Amazon when I ordered the computer. That was my own stupidity. I should have known better than to think I could get one locally way out here in Sparrow Fart.

In short, the biggest brick-and-mortar retailer in the world didn’t any of the three very common, pedestrian items I was looking for today in stock. So why on earth should I bother with them? Had I not also had to go to BJ’s, the trip would have been just a waste of my time and gas.

Look at it this way: I can drive 50 miles through winding mountain roads infested by suicidal deer to get to Walmart, only to find that they don’t have a single item I went there to buy; or I can fire up a browser, buy them from Amazon, and have Phil the UPS guy deliver them to my doorstep. Which would you do? And if the answer is buy them from Amazon, then what the hell do we need Walmart for?

Back in olden times when horses and buggies ruled the roads and I was young, there actually was another reason to shop at a brick-and-mortar store rather than ordering by mail order from the Montgomery Ward catalog, which was the closest thing we had to online shopping. It was a value-added thing called “Product Knowledge,” and stores were where you could find it.

I started working at my first legal job when I was 14. It was at a department store in Brooklyn called Times Square Stores, or “TSS” for short. It later became “Seedman’s,” and even later was sold to some other company that promptly managed to put a once-thriving store out of business. But I digress.

When I worked there, TSS was an old-school department store where employees were assigned permanently to their departments and were expected to become experts on all the products that they sold. I worked in the bicycle department, and if any customer ever stumped me with a question about bicycles or accessories (or if I ever gave out bad advice), I probably would have been fired on-the-spot. It didn’t matter that I was a 14-year-old kid. I was supposed to know the products and be able to give helpful advice. But I also was paid pretty well. The base wage wasn’t much more than minimum, but the commissions were generous; so there was a financial incentive for me to learn my products.

Now ask yourself: Have you ever met any employee at Walmart whom you would trust to give you expert advice? Or how about Best Buy? Years ago, I stopped shopping at Best Buy because I hated being the smartest guy in the store — and I’m not all that smart. I’m just smarter than the morons and bullshit artists who work at Best Buy. Their advice is about as useful as the tits on a boar hog, as my Southern friends would say. And that, my friends, is the second reason why brick-and-mortar stores are dying: They don’t pay worth a shit, and therefore they’re staffed by morons.

So if brick-and-mortar stores don’t have the stuff you need in stock, and you can’t get good product advice from the people working there because they’re morons, then why in the world would anyone with a shred of common sense bother shopping at them? You’re better off with Amazon. Their selection is near-infinite, and their review system and crowd-sourced question-and-answer sections are infinitely more helpful than any advice you’re likely to get from someone who works at Walmart or Best Buy.

Maybe brick-and-mortar retail is dying because it deserves to die.

Brick-and-mortar retail is on life support. That can’t be denied. But it’s not too late to save it. The problem is that saving it would require the companies to do things that they and their shareholders won’t want to do. They’d need to improve their variety and their inventory management, which would mean going back to having storerooms, with all their associated problems. More importantly, however, they would need to employ higher-caliber employees who would be capable of becoming experts at what they sell, which in turn would mean — gasp — actually paying them a living wage.

In other words, it’s not going to happen. Brick-and-mortar retail is dying, and there’s not a damn thing anyone can or is willing to do about it.

Montgomery Ward, Caldor, and Ames are all gone. Radio Shack is dead and too stupid to lie down. Sears and K-Mart (really the same company) are on the rocks, and many experts don’t expect them to survive the year. Macy’s, J.C. Penney, Best Buy, Game Stop, and Office Depot are also gasping for air. The Limited announced yesterday that they’re closing all of their stores.

One by one, they’re all dying.

The sad part of all this is that those brick-and-mortar stores do create a lot of jobs. They may be shitty jobs, but having a shitty job is better than having no job at all. I’ve had enough shitty jobs that I can speak from experience on that. At the end of the day, it’s about a paycheck: and any paycheck is better than no paycheck at all.

If it weren’t for those people who need those jobs, as shitty as the jobs may be, I wouldn’t care at all about the demise of brick-and-mortar retail stores. In the end, the industry dug its own grave.