Back in olden times — specifically, in the late 1990s — the wizards of the Web succeeded in creating something that would soon become even more universally despised than cockroaches: the pop-up ad. These ads were JavaScript-powered new windows that would literally “pop up” out of nowhere and obscure the visitor’s view of the site that he or she was viewing. The visitor would have to click the ad closed to finish reading the site.

Pop-up ads didn’t last very long. They spurred a cottage industry of browser add-ons and plug-ins whose sole purpose was to stop these annoying ads from ever opening. Before long, that functionality was built into every major browser and enabled by default, and peace returned to the Interwebs for a while.

In the past few years, Web designers have taken to using and abusing another intrusive technology commonly known as a “lightbox” to annoy visitors. A lightbox is basically a script that causes a window to appear in the middle of a page that you’re viewing, while dimming everything else on the page. Kind of like this: 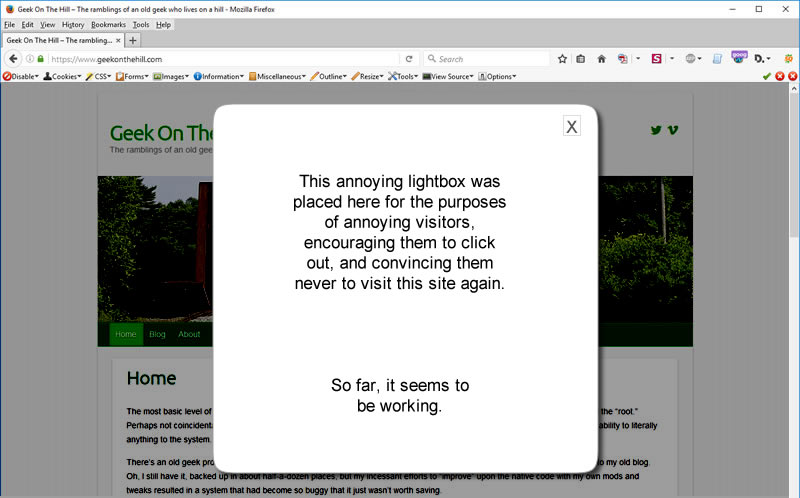 The lightboxes usually don’t contain ads. Typically, they ask the visitor if they want to sign up for a mailing list, get a discount, chat with an agent, or some other silly thing that could have been accomplished a lot less annoyingly with a simple HTML link somewhere on the page.

Another set of devices along these lines are “sliders” that slide in from one edge of the screen or the other to ask the visitor the same inane questions; or chat boxes that open up unbidden offering the visitor a chance to chat with “Bob,” “Joe,” “Betty,” or “Sue” at “Company Headquarters;” but who almost certainly are really located in Bangalore, and whose names are almost certainly not Bob, Joe, Betty, or Sue.

Another annoying variation is to use a slider to start playing a video (again unbidden) pitching whatever product the viisitor is already reading about. Why? You already got the visitor on your page reading about your product. That’s the hardest part right there. So why do you want to annoy them and make them leave?

I just don’t get it.

Just in case lightboxes, sliders, and auto-starting videos weren’t annoying enough, many Web designers have decided to add “Sharing” buttons that float over and obscure the text so you have to alternately scroll over and under them to read what they’re hiding. Why not just place them somewhere unobtrusive and let the visitor choose whether or not to click them?

What baffles me is why so many of my fellow Web designers don’t get that these devices they’re implementing are every bit as annoying as pop-up ads used to be. The annoying thing about pop-up ads wasn’t that they were ads. Most users don’t mind ads. They get that ads are what pay for the free Web. What was annoying about pop-up ads was that they popped up. They interrupted the viewer’s train of thought and forced them to take an action to close the ad to continue reading the site’s content. That was the annoying part.

So why should a lightbox that does exactly the same thing be any more welcome than pop-up ads were? The answer is that they’re not. They’re every bit as annoying and every bit as repellent.

In fact, when I’m viewing a site as a visitor, the best way to get me to click out is to throw a lightbox or a slider at me. I don’t care what it contains. In fact, I usually don’t even read the text in the box. I just click out of the site.

When did one of the goals of Web design become to annoy and repel your visitors? I know it was pretty recently; and I can tell you this: It’s working. Other than when I’m working, I rarely get on the Web anymore. It’s just getting too annoying.